What is a King William IV penny from the United Kingdom worth?

England, Ireland, Scotland, Wales, dependancies, and British colonies from 1830 to 1837. 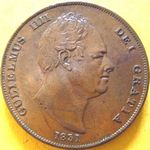 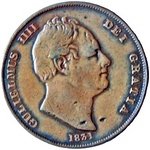 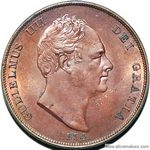 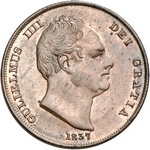 his brother (George IV), who had no surviving heirs.

Dubbed 'the sailor king' for his naval service in his

younger years, William had not expected to be King.

William did not marry, due primarily to the Royal Marriages

Act of 1772, which forbade decendants of George II from

marriage without consent from the monarch, or privy council.

William did have a defacto relationship producing many

children, none of which were considered legitimate, so had

no claim on the throne.

facing right, with the date below.

The reverse shows the helmed Britannia,

her hand resting on a shield.

In the exergue below is a rose, thistle,

and shamrock, symbolising the union of