George IV ascended to the throne in 1820,

after his fathers death (George III).

Prior to ascension, George IV served as Prince Regent

Dubbed 'the first gentleman of England', he was disliked

by the general population for his extravagance and lack

of leadership during the Napoleonic wars.

facing left, with the date below.

The reverse shows the helmed Britannia,

her hand resting on a shield.

In the exergue below is a rose, thistle,

and shamrock, symbolising the union of

What is a King George IV penny from the United Kingdom worth?

England, Ireland, Scotland, Wales, dependancies, and British colonies from 1820 to 1830. 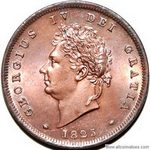 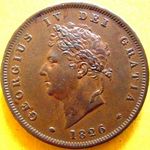 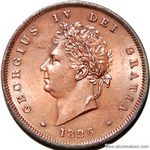 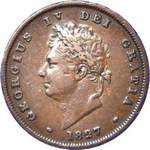