George III is primarily remembered as the mad king, and

for losing the American colonies, however was reigning at

the formation of the United Kingdom of Great Britain and

Ireland, and oversaw the discovery and settlement of new

colonies, including in Australia.  From 1811 his eldest son

(George IV) acted as Regent, due to his father's ill health.

from silver, however we are concentrating

include copper pennies, leaving silver to our

The first copper penny was minted in 1797, with

outsourced to the SOHO mint in Birmingham.

The obverse shows the robed bust of King

holding a trident and an olive branch.  More

What is a King George III copper penny from the United Kingdom worth?

England, Ireland, Scotland, Wales, dependancies, and British colonies from 1760 to 1820. 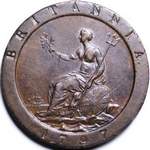 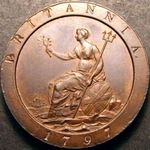 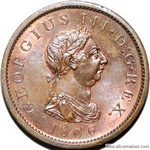 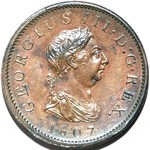 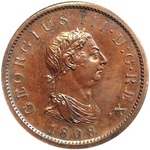