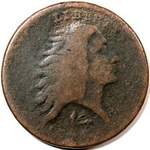 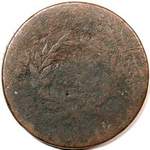 What is a flowing hair one cent coin from the United States worth?

Values, images, and specifications for the flowing hair

The 'flowing hair' one cent coin was the first

regular issue one cent coin struck for the newly

Struck only in 1793, the obverse and reverse

designs were changed during this year, although

the reverse much more significantly.

Early coins were minted with the 'chain reverse',

although this design was short lived, superceded

by the 'wreath reverse', which was maintained for

Issued under the USA's first president,

with wind-blown, flowing hair. Above is the word

'LIBERTY', below is a sprig of leaves and date.

'UNITED STATES OF AMERICA' as the legend.

'UNITED STATES OF AMERICA' as the legend.